Caporal Chien, though wary, lead his Tirailleurs Sénégalais in an advance towards the newest Natives ahead.  Taking up their firing positions, they blasted the quiet of the jungle with rifle fire.  These strange new Natives were almost completely fearless, standing as they were, practically avoiding the jungle's cover. 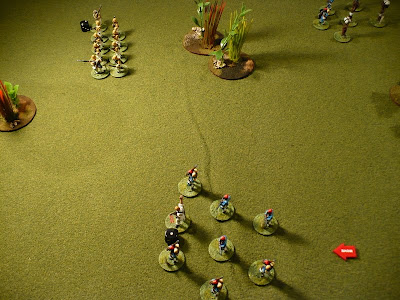 Their bravery was well earned, too, as all of the tirailleurs' shots missed.  To Chien's surprise, the Pygmies -- who already seemed desperate to shoot back with their blowguns, but were out of range -- now came at him at a steady trot.  Chien's men raised their guns to shoot, but Chien called out to them to hold their fire, not to waste their ammunition on a rushed shot.  The Cannibals, seeing the raised guns, halted.  Chien decided not to waste the chance overall, and gave the order to fire.  Yet again, even though they were not rushed, the tirailleurs missed.  L'indigènes moved not a muscle; their stillness made them all the more terrifying to the squad. 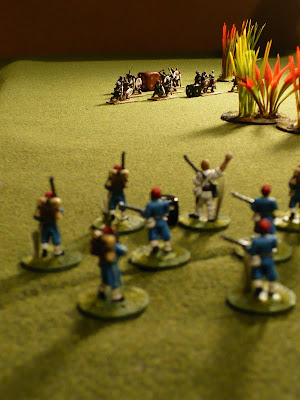 Sergent Cur, leading the nearby squad 'A' of la légion étrangère, decided to add his weight of fire to the mix.  Hoping to drive the Natives away, instead Cur's men inflicted a definite three casualties!  Cur laughingly suggested to his squad that would be enough for them today.  However, the words died in his throat as these fantômes not only did not run away, but made no reply whatsoever.  They merely stood perfectly still, cool as cucumbers. 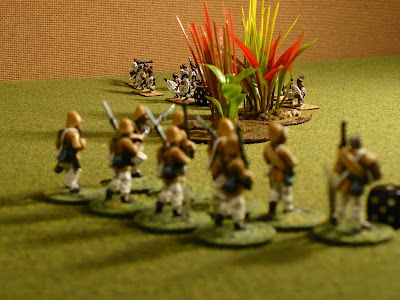 With some aggravation, Cur felt he had no choice but to shoot again.  He had to either kill them all or drive them away.  This time one Pygmy fell, and to Cur's relief it was the Brown-shield leader.  Not bothering to watch, Cur turned away, expecting the rabble to disappear into the jungle.  Yet again he was surprised, when one of his troopers gestured for him to look.  The Natives fell back in good order, even firing a blowgun salvo at la legionnaires, although it caused no damage.

Out of the corner of his eye, Cur also caught sight of the only other remaining squad of Pygmies threatening him.  To his right -- and to the front of Lieutenant Frye -- l'indigènes advanced from their hiding place at their detestable shrine, having apparently taken courage from it, to a place of comparative safety behind the ruined walls surrounding the shrine.  Cur cursed in several languages; now they would have to evict them from thick cover, which would probably require his men to make physical contact.  This mission just kept getting worse and worse. 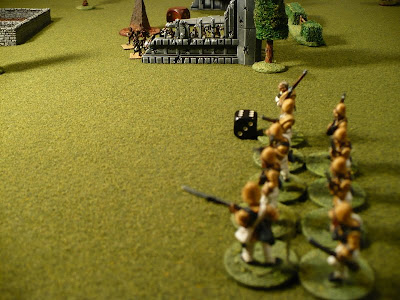 Frye had seen the Natives advance, too, and his anger at the loss of his "easy" mission was phenomenal.  He quickly rapped out orders to the senior trooper of 'B' legionnaires, Cane, determined to regain the initiative and prevent those Pygmies from feeling any sense of security there.  'B' changed formation to an open one to better navigate the jungle scenery, advanced as far as practical, and then reformed their firing line.  From this forward position, Cane brought his weapons to bear and fired, causing at least one Native to drop to the dirt. 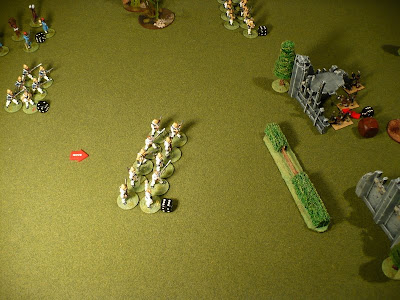 While l'indigènes seemed shaken yet they did not flee.  They merely huddled closer to the stone walls. 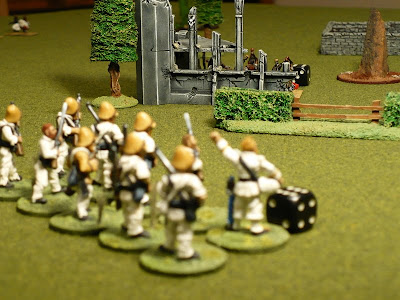 Lt Frye then brought his Marines up, without wasting time changing formation.  They advanced as far as possible in support of the legionnaires. 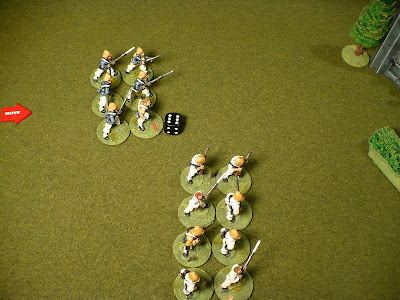 As the Lieutenant looked around, surveying his position, he was satisfied once more.  No more gunfire had occurred from his left for nearly a minute, and no Natives threatened his control of the immediate jungle.  It appeared the dead Native at the shrine wall was dead after all, a fact which finally convinced these l'indigènes to flee farther away than before, quite scared. 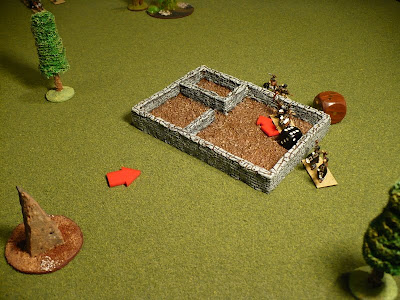 Sgt Cur, on the other hand, was feeling distinctly uncomfortable about this newest squad of Natives.  He had seen the Brown-shield leader shot with his own eyes, yet now he watched him rise up from the thick carpet of long grass, seemingly unharmed, as well as three of the four other casualties he thought his men had caused.