[Turn Fourteen Begins; The Final Turn of the Game]

Lieutenant Frye knew he had to press his advantage.  He ordered his l'Infanterie des Marines to advance in open formation; "Maintenez la pression," -- "Keep the pressure on!" the Lieutenant cried. 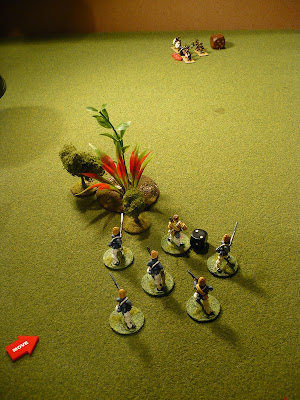 As he hoped, l'indigènes were still too stunned to respond.  Or were they finally cowed?  That infamous brown-shielded leader...was he at last ready to accept defeat?

With the marines in position, Frye relayed his orders to Caporal Cabot.  Cabot dutifully relayed them to his men:  "Fire!"  The shots exploded in the thick jungle air, echoing from the clearing with the shrine.  A shrine within reach, now.  Frye was pleased to see a pygmy drop into the dirt.  Still there was no reaction from the little men.

A second command from Lt Frye, and the Tirailleurs Sénégalais marched closer, occupying the clearing and taking possession of the shrine. 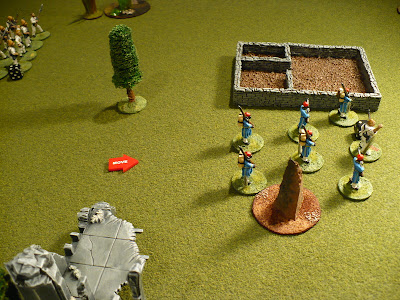 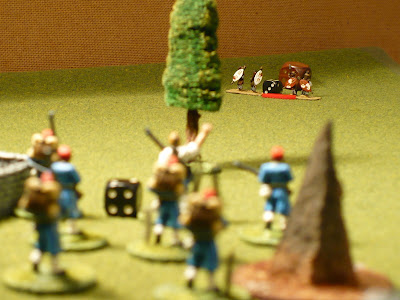 Frye began to allow himself to believe it was over:  the cannibals were unable to reply, and would surely retreat for good, soon.  "Sûrement?"  -- "Surely?"

A long tense pause followed the tirailleurs' entry to the clearing.  A brightly-plumed bird took flight, leaving a streak of color in the air.

Lt Frye decided to secure his position against the prospect of another attack.  He ordered the marines to form a supported firing line, and the tirailleurs to advance out of the clearing and force the Natives to either fight or flee.

Frye tapped his foot impatiently.  He caused his tirailleurs to form up into a single firing line, blocking access to the clearing. 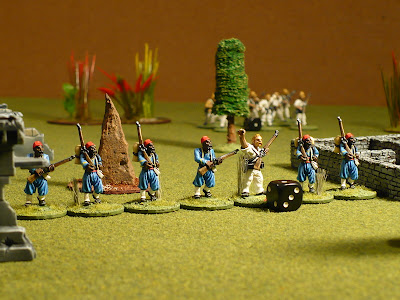 Next he called over his shoulder for the senior trooper of 'B' légionnaires, Cane, to bring up his men in open formation.  As a precaution, after moving closer, Cane reformed his squad into a supported line, then blazed away at their near-stationary targets.  The range was on the long side, but Cane was certain their fire caused at least one casualty. 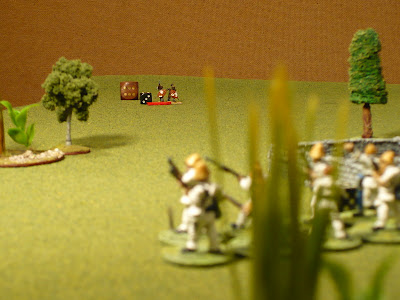 ..And yet, still no response..

Caporal Chien then had his tirailleurs fire.  Being much closer, and more frightened of the little monsters, the tirailleurs' shooting was decidedly more accurate:  when the smoke had cleared, there were no standing l'indigènes to be seen!

A wan cheer wafted out of the clearing, echoing weirdly in the steaming wet air.

Frye wasted no time before consolidating his position.  He called for Seejee and Sawjaw to bring up their Native Bearers, and begin the work of defiling, defacing and removing the wretched shrine from the jungle clearing. 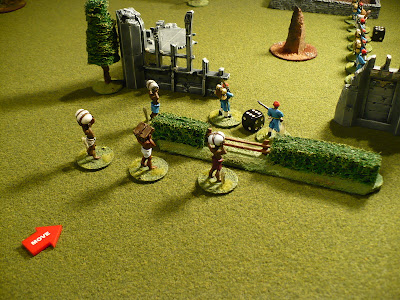 To cover his rear, he made his voice heard (it took a shout, to be sure) by Sergent Cur of 'A' Légionnaires, who brought his men forward, shamefaced, now that the fighting was over.

Lt Frye sat down heavily, sweat drenching his tunic.  He had won through in the end, and his name would no longer be associated with that of cowards -- not if Frye had anything to say to Sgt Cur, that is.  Wiping his brow with a handkerchief, he looked around and took in the object of the mission:  this dreaded shrine of death.  He laughed, a hard, short sound, then snorted in disgust.  This shrine?  This shrine was nothing more than a hunk of rock sticking out of the matted jungle floor with a few painted or carved hieroglyphics on it!  What a waste, he thought.  What a waste.

Deep in the cover of the jungle, only one Pygmy warrior survived.  Bloodied, bruised and bitter, he nevertheless crept closer to see what the Evil White Men were doing to his beloved religious totem. 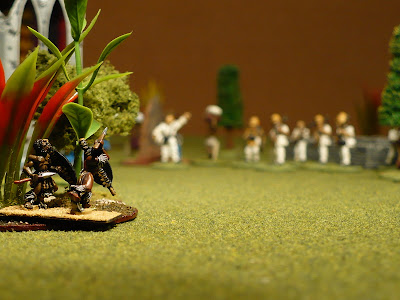 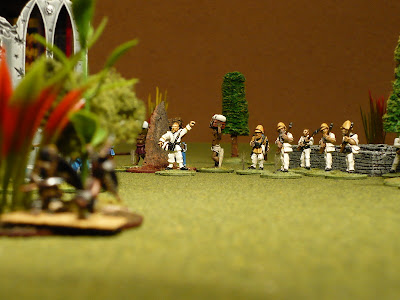 His anger burned to a molten pitch when he saw their intentions, yet he knew he could not stop them.  Not alone. 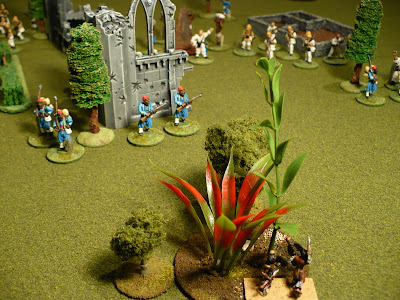 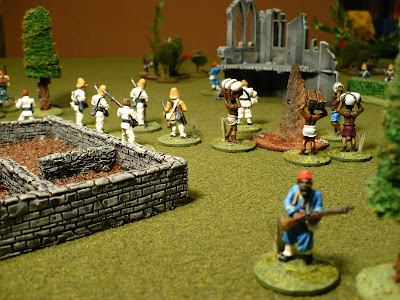 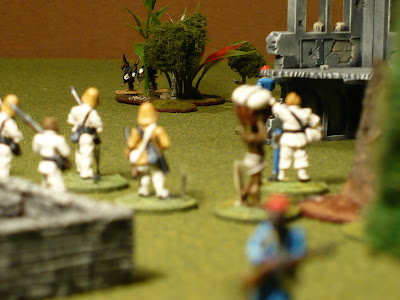 Yet he also knew that the ghost leader -- he-who-does-not-die -- le leader du fantôme -- would someday return to wreak his revenge on the French.  The revenge of all the Pygmies would be terrible indeed!

So I expect Lt Frye will return to his base, touting his glorious win against demanding odds (with all of which I agree), while simultaneously downplaying his losses and muddle-brained mid-game situation.

Will we see the ghost leader again?  Very possibly.  I quite liked the imagery this game produced for me.  The characters really took on lives of their own, and it was a ton of fun coming up with "explanations" for why a group did something unexpected.  In point of fact, the ghost leader turned into an unstoppable machine by purest chance; he was simply a regular Pygmy brown-shield who continuously refused to run away; I did nothing special rules-wise to make him tougher than the others.  After a while, I started wondering what it would take to get rid of him.  I had fully expected the game to be over around Turn 8 or 9, when there was really only one Native squad active on the table.  I mean, how long would one squad survive?  Quite a bit longer, as it turned out.

Next post (or soon, anyway) I'll have a more detailed description of the actual rules, and how I molded a story around a solo game.  This game was an absolute blast to play.  It took me the better part of a month to actually play it out (due to writing down all the moves, taking pictures and carefully documenting everything); luckily I was able to leave it set up for that long.  I do regret that it took me over a year to finally "blog it all out," that is, write the ficitionalization of the game, but each turn took me roughly two hours to write plus picture-upload time.  Sometimes it's difficult to find that much time, all in a row!