Good news, everyone!  I no longer consider myself a painting coward.

It came about like this:  After my failure at the tree, er, sorry, my failure to man up enough to "dip" my figures, I was faced with the option of what to do.

Because the whole point of dipping is to save time and money (but mainly time), I decided to throw money at the problem.  I went right out and bought another can of Minwax's Water-Based Wood Stain, and this time I very carefully considered the color samples in the store.  Here are a couple of pictures I took with my phone, using ambient lighting. You can see that the Classic Black has some brown in it (which is why I went with it the first time); the American Walnut is less dark and more brown, and the Coffee is lighter still.  I opted for Coffee. 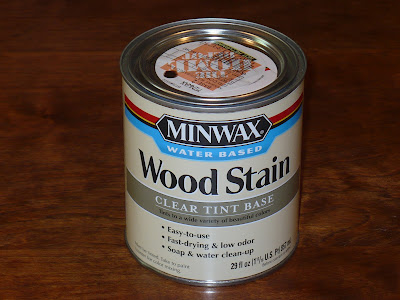 Here are the results of my first attempts.
I was afraid that it was still too dark.  I began to wonder if there was something even lighter brown than Coffee.
However, before I spent another $11 + change, I decided to try the Future Magic Wash.

I took the darkest brown paint I have, and liberally added it to the Magic Wash.  I then washed this mixture on the two figures on the right (picture below).  The two on the left are washed with Coffee stain.
I added what I felt was a sufficient quantity of paint, but it barely even stained the figures, as you can see.  Apparently I need to add a lot more paint.

So I got to thinking:  the point of using either Polyshades or Future is to both wash and seal the figure in a protective clear-coat layer all in one step.  That is part of the time-saving feature.  However, I don't like Polyshades and the Future didn't work for me, so any time advantages I might have gained I would have to give up.

I realized that I am less interested in the time-saving aspect than I originally thought.  I still want a good-looking figure, but I could just as easily have taken my brown paint and washed the figures instead of diluting it in the Magic Wash.  I still don't like non-water-based agents, which is a shame because you can get a pint of Minwax Polyshades for around $7 which is more than enough to cover all the minis I have; instead I had to buy a quart (because the color is custom mixed) and it cost me around $11.  So now I have two quarts of two different brown stains, plus a bottle of Future floor polish (mostly unused) which originally cost me around $5.  In other words, I've spent roughly $27 plus tax, and for $30 I could have had one of The Army Painter's Quickshades (although, again, they're non-water-based and only about a pint in size).

But, y'know, sometimes I enjoy the discovery process.  And I like to be reminded that more often than not, time-saving shortcuts are not.

Therefore I finally committed to the Coffee stain, and through trial and error on the amount of stain-on-brush to use I got the following results.
In the end, I ended up going back over the figures with a quick dry-brushed highlight, then spraying a clear-coat protectant like I do for all my normal painting.
I'll have to double-check my records when I get home, but these twenty men took me (I think) about 10 hours start to finish (that is, from first paint application to finishing the bases; it does not include filing the metal).
That works out to 1/2 an hour per figure, which for me is pretty darn fast.  I expect it will go even faster on the next group, and the next, etc.  Unfortunately, with 6-8 more groups of twenty to go, and the ability to paint only 10 days out of the month (and spread out, not ten in a row), it will still take me forever to finish....

Thanks for reading.  Here are some pictures of the first group of 20 men completely finished.  You can click them to enlarge them slightly. 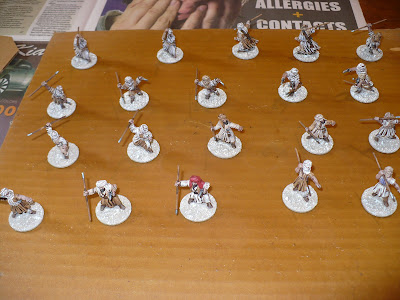 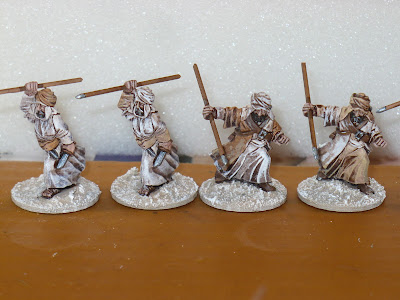 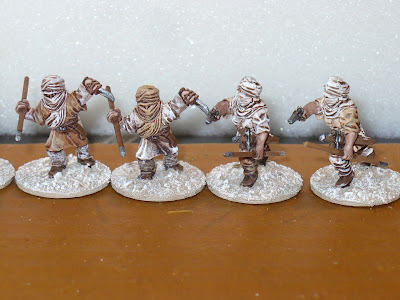 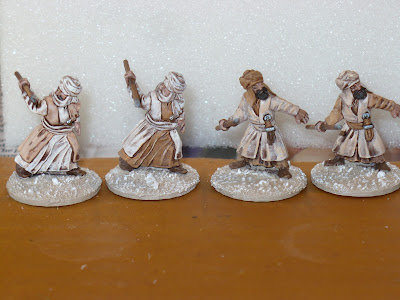 Update:  It's taken me so long to even get around to posting this, I have almost finished my second group of 20 figures.  The good news is it's still averaging around 30 minutes per figure.  I had hoped to finish them before I had to leave for work again, but I wasn't able to.  Pictures will appear when I am next home!  I do think the dipping is a time-saver, but I might be slightly biased into believing it because I want to believe it.  But after this group, I am going to take a break from Arabs and "have a go" (as the English say) at some zombies.  I think the dipping will help with them as well.  Will report soon!
Posted by Kelroy Was Here at 7/05/2011 05:44:00 PM