43. I Continue to Game in Public

In August a couple of weeks ago, I attending a local one-day miniatures mini-convention near where I live:  Skirmish.  It's put on a by local group called the DFW Irregulars who themselves are part of the Lone Star Historical Miniatures group.  I first attended two years ago but was not able to attend last year.  This year's con was slightly larger than 2009's, in that they had expanded from one large room to include a medium sized room as well.  It's been reported that they had 92 attendees and 26 games across three time slots.  There were several local vendors as well:  Texas Toy Soldier (also dba The Terrain Guy), Grenadier Books, Portsmouth Miniatures, and Frontline Games.

I think originally, Skirmish was intended as a Historical miniatures gaming convention, but (wisely, in my opinion) they expanded the selection to allow non-historical games.  Dr. Who, zombies, and other fantasy and sci-fi games were in strong evidence.
I invited four friends who have an interest in gaming, but who don't game for one reason or another.  Of the four, one accepted and came for two of the sessions.  I think he had fun.  This is an improvement on 2009 for me, when I invited two friends (different to this year) and neither of them came.  But one of them was kind enough to call me during the first session to tell me I could come with him to a new game group to play Descent that afternoon if I wanted to....

Any area's miniature gaming aficionados are, by virtue of the hobby we love, a small group of people.  You see the same faces time after time, at one game store's open gaming and another game store's open gaming.  So it pays to have thick skin and not make enemies.  I'm definitely seeing many of the same faces the more I game locally, which is a really good thing, and I can wholeheartedly say that I didn't have a problem with any attendee or GM at Skirmish.  What's even more amazing is that our "area" is a very large geographic area, encompassing all of the Dallas/Ft. Worth Metroplex, and a lot of these guys drive an hour just to get to the convention.  I think that shows more than anything else how small and insular our hobby is:  92 people came to play, out of a combined city-wide population of 6.4 million and 9,000 square miles!  So if you find someone with whom to game, with whom you like to spend time, HOLD ON TO THEM!

Anyway, here are some select pictures of my games.  I took a lot with my phone again, but won't subject you to them all.  I've not included anyone's last name, as I didn't ask permission before posting on my blog here.  Privacy, don'cha know.

My first game was a The Sword and the Flame (modified) game in the Sudan, run by Greg W.  From the Event description:  "December, 1885.  Khartoum has fallen:  Gordon is dead, but so is the Mahdi.  The Khalifa is now the leader, and has concentrated thousands of warriors around the Nile town of Ginnis for a possible invasion of Egypt.  To counter this threat, the British, in a surprise move, have concentrated their forces North of the village of Kosha, with a plan to take both towns."

And that's exactly what happened.  I set up my 3 artillery and one unit of rifles, and the British pretty much rolled in and ran us out of town!  It was a fun game, ably run by an experienced GM, although either our setup or the general disposition of forces unbalanced it slightly.  Note the left flank British player who never made contact the entire game.  And our reinforcements, to which he was reacting, were too long in arriving (ie, they never made it on the table).  More details in the pictures with pertinent highlights.  (Edited clarification:  I wasn't the only Dervish player.  There were 3 of us and 4 British players.)

The second session had my friend and I playing in Doctor Who, Dalek Invasion of Earth 2150 AD.  From the description:  "They've bombarded us with meteorites, subjected us to cosmic rays, smashed our cities, destroyed whole
continents of people!  Some of us they've turned into living dead.  Robomen.  But I tell you this, the wheel's turning full circle.  Our day's coming!  Take control of the Doctor's most frightful enemy, the Daleks, or play the resistance and fight back against the motorized dustbins and take back the streets of London.  The scenario loosely covers that battle between humans, Daleks, and Robomen before the arrival of the Doctor as the rebellion matches tyranny with courage against technological superiority."

We used the Doctor Who Miniatures Game (DWMG) rules, GM'd by Jamie M.  They had fantastic urban rubble terrain, and Dalek miniatures are always cool.  My Robomen didn't fare too well, and my friend Carl (who was playing the Resistance) got the first Dalek kill of the game, and a nifty real 20mm cannon shell as a reward!  The game played so fast with only four players (2 per side) that we switched sides and played again.  This time, my side still lost; however, I completed my unit's individual mission:  I retrieved the stolen plans and got them off the table.  (Of course, it took the sacrifice of both the UNIT soldiers to do so, but that's the level of commitment required to fight Daleks.)  And at the end of the game, all the players received a prize:  yes, these guys are the coolest.  I got the First Doctor, from Black Tree Design.  Yay!  Also, I didn't realize it at the time, but these rules are actually free to download. 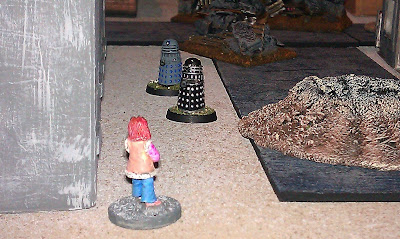 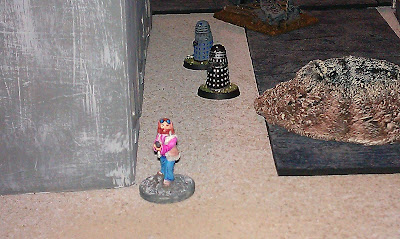 For the last session, I played on the same table (the terrain was re-arranged) a game of 7TV.  This was The Man with Silver Hands and the Silver Nemeses.  The description:  "Remember all those bad films that played on Saturday Afternoon in the early 90’s and late 80’s.  Have you ever thought, why doesn’t that bad guy just kill James Bond?  This is that game.  Everything you loved
about the Prisoner, the Saint and pulpy spy television is here.  In the year 2000 two individuals fell back in time, the insane Doc Grinder (cybernetic fiend of tomorrow) and the mysterious man with silver hands.  Now in 2011 the endgame has come.  Doc has unleashed his horde of the “silver nemeses” on a small town taking the inhabitants as subjects for experimentation.  The man with the silver hands and Department X must stop Doc Grinder before he unleashes his sinister plan for world domination.  The rules are very simple to learn.  Be prepared for a general level of campy-ness and puns."

Interestingly, these rules are very nearly the same as DWMG, as they're written by the same folks, so the concepts and execution are very similar.  Doc Grinder was actually an NPC, so I took the role of a group of Metal-nauts, intent on showing the world that the cyber way of "life" is better than the squishy way most humans live it.  My squad of baddies (so-called, quote-unquote) technically lost (since they all died) but my sacrifice bought Doc Grinder the time he needed to activate his time machine and escape, thereby winning the game, and winning for me a real 20mm cannon shell!  Yay!

This game was GM'd by Brian G., and was a lot of fun.  I enjoy campy games, and this had lots of camp.  He also awarded prizes, and I received two miniatures:  Tweedy Mattison & WPC May Killan (aka, one of the newest Doctor Who's and companion).  Very cool.

In the end, a good time was had by all (well, by me, at least).  My thanks to the guys of DFW Irregulars for putting this on each year.