It was time for a change of pace.  Although, technically, the action still takes place in the same desert as my last battle report, but any way....

These figures are from the Blue Moon Manufacturing line called "Things That Go Bump in the Night."  This is Box 4:  "I Just Don't Feel My Age - A Mummy Scenario."  They also have vampires, werewolves, and Frankenstein's monster, among other favorites.

They are very nice sculpts, and very clean castings, too.  It took me a long time to paint them because I was away from my painting table for long periods of time (days at a stretch).  The actual total painting time for all these figures was around 16 hours, but that was spread over around two months.  Interestingly, the bases are part of the casting; each is one single figure. 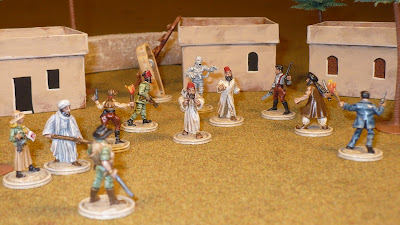 They have a slight shine to them due to me using a can of spray I won't use ever again.  I've hit them twice with a matte dullcoat, but the shine is still there, although it is diminished somewhat.  Sometimes, though, you just have to move on.  If I spray them any further, they'll all be two inches thick with matte-y fuzzy over coats!

In this particular case, the matte spray I used (for the first time, I should add) turned out to have a "satin" sheen to it, and the matte spray I bought to replace it just can't quite seem to cover it up.  Drat it all!

My usual technique after painting is completed is to use spray gloss to protect the miniature, then after that dries to use a matte spray to take away the gloss.  Gloss tends to protect longer from chipping or dropping damage than matte alone, but I prefer the matte look.  I then go back and touch up the parts that ought to be shiny with a brush-on liquid gloss (gun barrels, shovels, etc).

I also think spraying too much of either magnifies the highlights and reduces the painted shadows, which lessens the beauty of the paintjob.  They looked much less stark before the spraying; the blending was better, if I do say so myself.

So that can of so-called matte spray goes in the trash.  The gloss is close behind it.

At any rate, the box comes with a one-page (front and back) set of quick start rules for the Goal System series of rules available from Old Glory/Blue Moon.  This is a very basic introductory set of rules (my box didn't include the sheet, which is just a mistake as another box I bought does include it; but it is a free download from the Blue Moon website).  It doesn't have stats for every single figure in the box, and quite frankly I'm a bit confused as to which figure is which per the stats they do give, but overall it's easy enough to make work.


They were a real pleasure to paint up, and I look forward to my next box:  The Headless Horseman!