So there I was at the dollar store, innocently buying candy for the kids' Christmas stockings, when I come upon the following:  undead Dinosaurs!  Well, dinosaur skeletons, at any rate; probably meant for display in a miniature museum.  But they're scaled perfectly for 28mm, and they were $1 a package!  I bought two packs, and they had two more packs with different dinosaurs in them that I didn't buy (mainly because an undead Duckbill dinosaur just doesn't seem all that scary, nor does an undead Pterodactyl.  Maybe it's just me....). 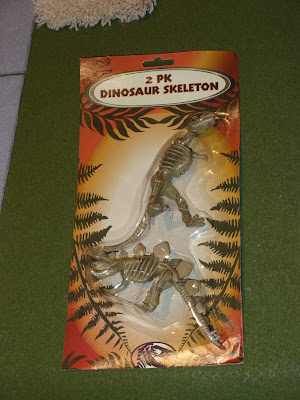 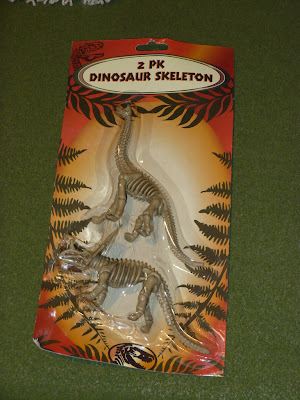 And here's an action shot of a fearless Legionnaire finding out he's gotten more than he bargained for! 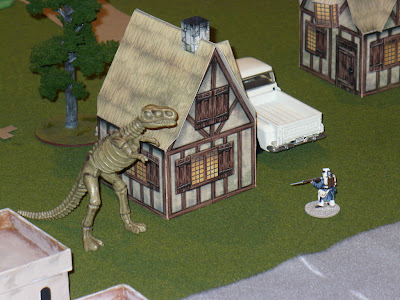 On another line of thinking, I've been slowly getting into the Zombie gaming craze.  I bought Two Hour Wargames' "All Things Zombie:  Better Dead than Zed" (otherwise known to the "in" crowd as ATZ:BDTZ) during their Black Friday sale, and I must say it's quite enjoyable.  I'm limited in my number of zombies, so I'm making-do with the 1:72 scale plastic zombie chicks from the Zombies!!! board game by Twilight Creations (they're cheap, and close enough in scale to see me through my zombie-free crisis).

One thing the rules want you to do is place a marker whenever a gun is fired, or other similarly loud noises occur, as that attracts zombies.  I didn't have what I felt were appropriate markers; little pieces of cardboard just didn't do it for me, and dice take up too much room, plus I get them confused with the dice I'm actually using.  So I went to Hobby Lobby and picked up a package of ruby red acrylic gems, normally used for decorating and "blinging" little girls' purses and such.  It was $3.47, but I just happened to get it this week for 50% off.  What luck!

So here's what they look like in action (I should mention that these are not 1:72 scale plastic zombies from Twilight Creations; they are, in fact, Dungeons & Dragons zombie miniatures).  Our fearless heroine blasts away at a hapless zombie shambling toward her. 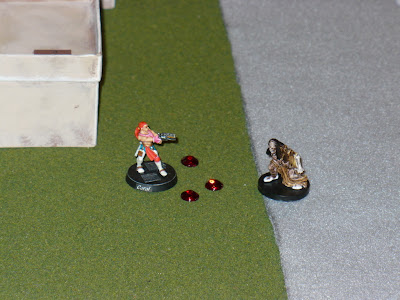 Uh oh, she missed, and what's worse, she's brought more zombies to the feeding trough that is going to be her!  Zoinks!  Better run, honey! 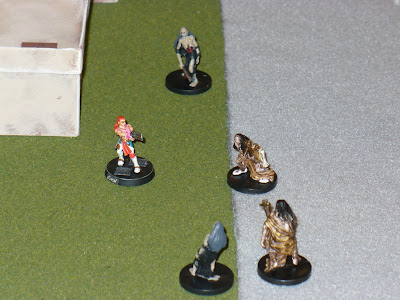 I also bought some grey felt at the fabric store, and made myself some roads.  Ya gotta have roads in modern zombie gaming, y'know.  I simply cut 8" wide strips, in straights and curves, and then took a white china marker and drew some simple white stripes down the center.  Here's a pic of one road section (I might put up more pictures soon of them all, but I'm not completely finished making the various shapes yet). 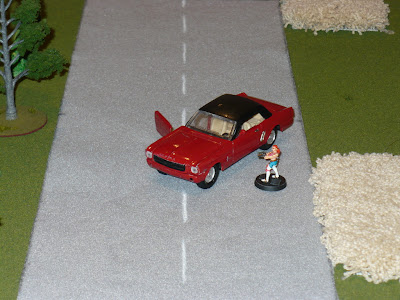 They don't look nearly as good as the felt roads from Hotz ArtWorks, but it cost me $5 for 36" by 72" and all I have to do is cut them out.  I can live with myself until the day I can afford the good stuff.