This is Part Two of Two, of a Post-Apocalyptic game I played solo a while back.  The game was actually pretty boring, and I didn't really enjoy the rules; nevertheless, I'm writing it up here as a public service.  :-) 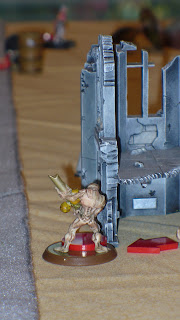 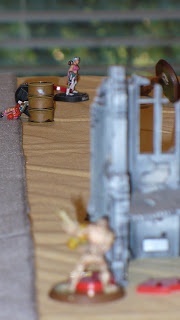 Finally, Scrag #3 moves all of 3" (which was luckily all He/She/It needed to move) to bring Moonstone into view.  Shooting at her resolves with 4 Scores, causing 2 Hits, resulting in 1 Wound.
Turn 4 ends.

The Diamond Leader then stood up with her 1st AP, and used her 2nd AP to shoot at the oh-darn-I'm-now-in-the-open Scrag Leader.  However, she spectacularly failed to accomplish anything other than forcing the Scrag to crouch, too.

The Diamond Leader tried shooting at the Scrag Leader again.  She not only accomplished zero Hits, but she also got herself Out of Ammo.  So she used her 2nd AP to reload.

Next, the Scrag Leader shot at the Diamond Leader.  The same problem he had last time occurred again:  4 Scores, but the Defense + concealment wiped them out to zero Hits.

This time, the Diamond Leader didn't have to crouch, and in fact gained a free AP "in reaction."  So she shot back for zero Hits and an Out of Ammo result.  Wow.  Good job.

The Scrag Leader didn't have to crouch, either, as part of its Morale check, and gained a free AP.  So naturally he/she/it shot at the Diamond Leader.  Do you see a pattern here?  I was really trying very hard to finish the game by killing one of the leaders.  Really I was.

Anyway, the Scrag Leader got 3 Scores AND and Out of Ammo result (all game long, no Out of Ammos, and now 3 in a row!).  BUT, the Defense + concealed AGAIN cancelled it to zero Hits, and she passed her Morale check, got a free AP and used it to reload.

The Scrag Leader now used his/her/it's ORIGINAL 2nd AP to reload.  Wow, what an incredibly exciting turn sequence.  I'm all a-flutter....
It's actually been several weeks (heck, maybe months by now) since I played this game.  So I cannot give an accurate critique of the rules, other than to say I found them contradictory in many places and quite confusing as well.  HOWEVER, and this is a big however, English is NOT the author's first language, so please take that into consideration (let me caveat that by saying I do not know this for fact, I only infer it from the author's name and where he lives, based on his website).  I actually quite like the background that is included (ie, the different troop types and whatnot), and many of the general concepts are pretty cool.  And if you're less bothered by contradictions than I am (meaning, you can decide on how you want to play something and stick to it) then you'll probably like these rules.  Plus, there is apparently a new version now available, and they are all free, so really, what's to complain about?

Links to where find the rules are in Part One (see the link at the top of this blog entry to get there).

Whew.  Now that that's over, I'll be back soon with something a bit more fun (for me, anyhow).  Stay tuned for...Robin Hood!