It was obvious to Capitaine Woolfe that he had walked into Chief Otanga's trap.  Another group of Black Shields, thirteen strong, had emerged from the trees to their left; as well as a second mob of ten Black Shield to their right.  Otanga apparently planned to swamp them in vicious Pygmy warriors! 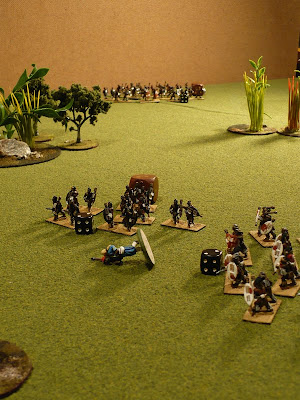 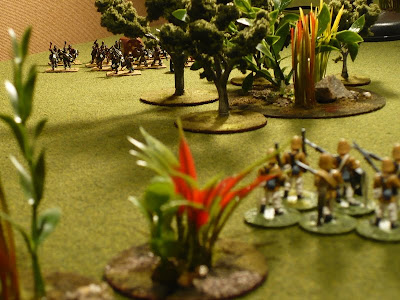 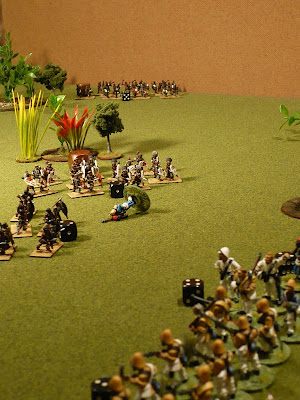 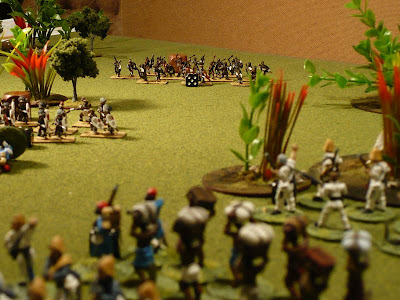 Woolfe calmly considered his position and gave his orders in a clear voice.  After the wreckage caused by the routing of the Tirailleurs, the Natives closest to him were in a state of indecision as they considered their position.  He grabbed the initiative.  He had the legionnaires on his left under Sergent Cur wheel 90 degrees in supported line to face the attack from the left flank.  Then he wheeled the Marines to face forward also, giving the order to fire at the leaderless Black Shields. 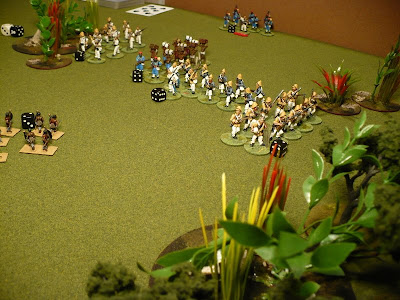 The volley caused one casualty, although Woolfe's and Frye's pistol shots missed.  The Natives' reaction warmed Woolfe's heart:  without their leader to guide them, they lost their nerve when under fire at such close range.  Shaken, they retreated toward their religious totem.

With smooth efficiency, Woolfe then ordered his Marines to fire at the White Shields closest to them.  The volley crashed out, and two Pygmies dropped.  Their reaction mirrored the Black Shields':  they retreated up-jungle, visibly shaken, hooting their displeasure at the White Man's fire-sticks.  As Woolfe watched, they practically "melted into the bush" as they retreated right through some of the densest jungle around.

Sergent Cur of legionnaire squad A could see the new Black Shields on the left creeping towards him, but they cleverly remained well hidden in the foliage. 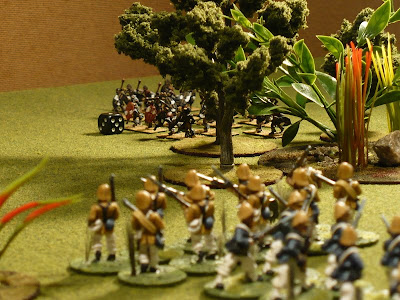 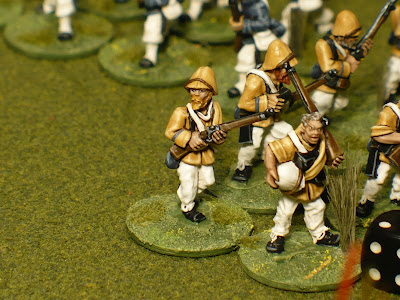 A legionnaire keeps careful watch on the approaching enemy.


The Black Shields on the right flank advanced to blowgun range.  Their hatred of the French was thrown over in favor of their hatred of their taller cousins, the Native Bearers under command of Seejee and Sawjaw, two able Tirailleurs.  The squad B legionnaires of Sergent Coyote were closer but hidden behind thick jungle, so the Black Shields blew their poison darts at the Bearers.  Two of the deadly barbs struck home.  In response, Seejee wished to fire back but Sawjaw convinced him instead to change their formation to an open one, thereby providing a little protection against the missiles. 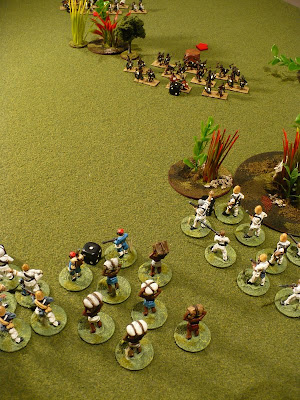 It appeared that l'indigènes were preparing to charge, so Caporal Chien urged his Tirailleurs to advance, hoping to get behind the Pgymies. 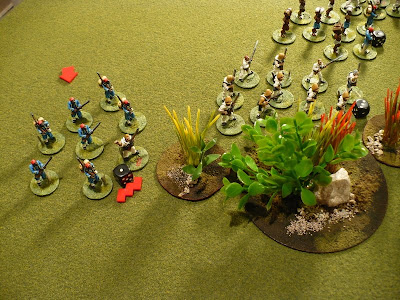 Before he could get very far -- especially in light of his men's still jittery nerves -- the cannibals screamed into close combat, heading straight for the Native Bearers.  Capt Woolfe hurriedly ordered his Marines to counter-charge, but the Pygmies were already in motion. 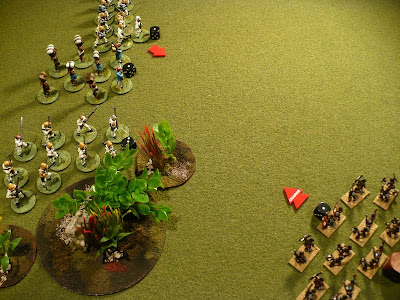 They swept into contact with the Bearers, where Tirailleurs Seejee and Sawjaw met them with ready steel.  The next moment, the Marines crashed into the cannibals' flank, trampling at least one native underfoot. 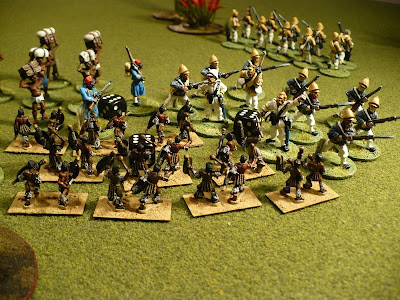 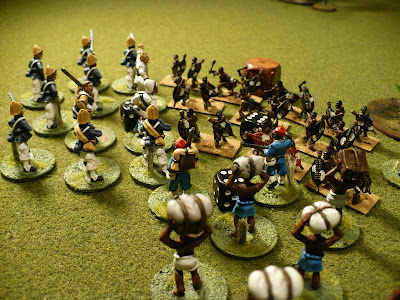 The Pygmies held an advantage in the combat that followed:  their fierceness, coupled with their shields and spears, were potent indeed.  They quickly cut down three Bearers, who were essentially unarmed and prone to panic.  Seejee saw off two Pygmies, then Sawjaw accounted for three more.  A Bearer disappeared into the tall grass at the same time he savagely kicked a Pygmy away.  The impetus shifted back and forth:  a Bearer, a Pgymy.  Then Seejee and Sawjaw, with a last ditch effort, forced the remaining Pygmies back onto their heels.  The Black Shields retreated in open formation, shaken by their defeat. 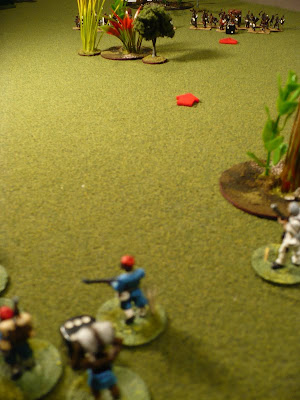 All that was left of the Native Bearers unit was Seejee, Sawjaw and Toopee, a shivering wreck -- but alive. 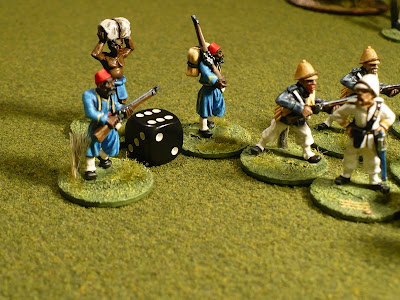 The mêlée was over before the Marines could do more than stand and stare.  They shouted jeers and taunts at the fleeing Pygmy warriors, some of them in an outrageous French accent.  "Your mother was a hamster, and your father smelt of elderberries!"


Once again there was a moment of quiet in the jungle, punctuated only by the soft sounds of booted footsteps.  Boochoo the Tirailleur came skulking out of the brush, having been knocked on the head earlier.  Of the near-defenseless Bearers, three miraculously reappeared unhurt, but two more -- Doopee and Loopee -- were missing, and Poopee and Zoopee would never bear a load again.


To Capt Woolfe's unbelieving eye, of all the Pygmies his men had dropped either through gunfire or bayonet work, nearly all found their way back to their units, slinking silently through the dense foliage.  As he watched, the disarray of the retreating Shields gradually vanished as their leaders asserted themselves.  Every Native squad returned to normal, ready to renew their attacks.


Shaking off the effects of the raw hatred of the vicious short ones, Woolfe surveyed his forces.  There, behind that screen of giant plants, Cpl Chien was still attempting to rally his Tirailleurs; they had witnessed the butchery of the Native Bearers and had not liked what they had seen.  The rest of his men were ready, if a little preoccupied.  Woolfe realized he needed to protect those Native Bearers if he were to complete his mission.