Capitaine Woolfe was preoccupied in his thoughts.  His men had sent Chief Otanga packing far more quickly than he had expected.  Maybe this would be as easy as Lt Frye said.

Naturellement, the Natives' next attack caught him completely unawares.

In order to take advantage of what time remained to him, Woolfe gave hasty orders; there was no time to tell his troops what he wanted from them in any kind of detail.  The Tirailleurs Sénégalais changed to open formation, then advanced to scout ahead.  Suddenly from out of the bush came the distinctive war cries of many Pygmy throats, both to the left and to the right! 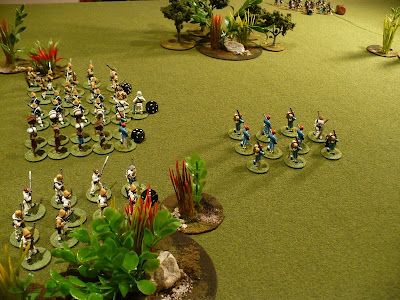 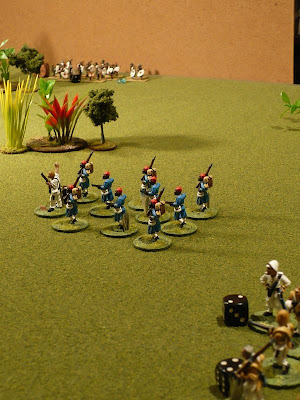 Before any of Woolfe's troopers could react the savages had rushed closer, beating their shields with their spears and clubs.  It was obvious they were on the charge! 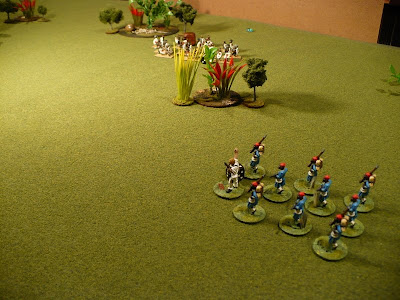 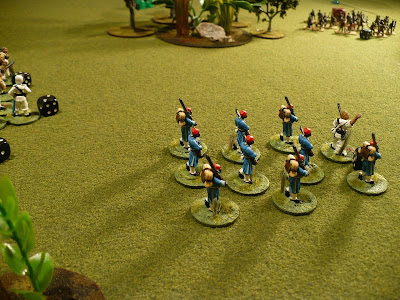 With the moment of surprise past, Sergent Cur formed his men back into a supported firing line, facing the furious rush of Natives from the left.

With deliberate calm, caporal Chien ordered his Tirailleurs to shoot at the oncoming ten to their left, those carrying black shields.  It was said of the Pygmies that Black was their color for death.  Bien, then Chien would teach them the meaning of death!  With a crash the shots rang out.  Brightly plumed jungle birds took to the air in startled terror.  Alas, that was all that was accomplished.  For all of Chien's bravado to his men, they were more spooked by the unnerving screaming than they realized as all shots missed.  What's more, the Black Shields were not deterred from their attack.

Too quickly for any other squads to fire, the whirling dervishes of half-pint horror were upon the Tirailleurs, charging in to mêlée from both sides at once.  Chien's men, natives themselves of the region and well aware of the singular animosity the Pygmies held for their taller cousins, not only stood their ground but fired twice, redeeming themselves for their previous effort.  Their volleys caused two casualties in the Black Shields, one of them a Pygmy with a brown-colored shield, possibly denoting leadership status amongst the savages; and one casualty in the White Shields attacking from the right, leaving eleven remaining.

And then the world dissolved into a swirling muddle of close combat, as diminutive monsters swarmed over and around the Tirailleurs. 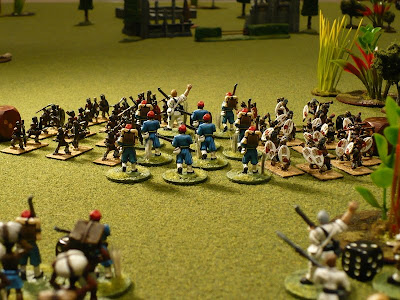 Spears stabbed, clubs whirled, and bayonets flashed as the human horde churned up the jungle floor. 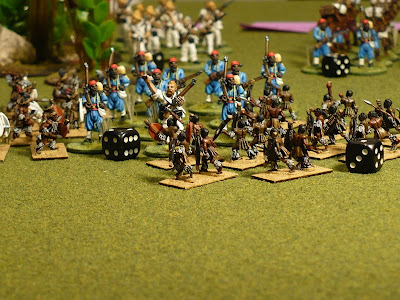 The Pygmies had the upper hand; having charged from both sides they were effectively attacking from the front and the rear, at least until the confusion of combat equalized out.  Back and forth the fight raged:  first one Native dropped, then three Tirailleurs fell back, then three more fell, possibly for good.  Suddenly the advantage shifted and eight Natives fell before the bayonets, then five more; two Tirailleurs fell; one Pygmy, and yet another.  With a frightening surge, with the cannibals prepared to completely overwhelm them, Cpl Chien played his last chance card, attempting to steal the initiative away from the savages; but his draw was lacking in the proper heroism, and he and his remaining men fell beneath the clubs and spears.

In the confusion of mêlée it was impossible to know who was dead, who was unconscious or wounded, and who was simply hiding in fear.  As it became apparent the Pygmies had won the contest, Chien and those of his men who were able, fled back towards the French lines, not realizing how devastated the Natives were as well.  Even had they known, it would not have soothed their shaken morale; they'd been beaten, and that, badly. 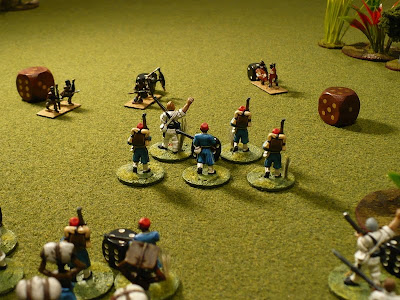 In the first quiet moments after the scuffle, as the wildlife sounds returned to the trees, other sounds made themselves known, too.  Specifically, the sounds of frantic men finding their way back to their unit.  Three Tirailleurs - Beechee, Gruunta, and Timaar - appeared out of the vegetation, bloody but whole.  One more, Boochoo, remained missing; and poor Lokky the unlucky would never rise again, the first casualty of the mission.

For their efforts, however, four of the eight missing Black Shields, including their leader, were dead.  The White Shields fared better:  seven of the ten missing, returned, as vicious as ever. 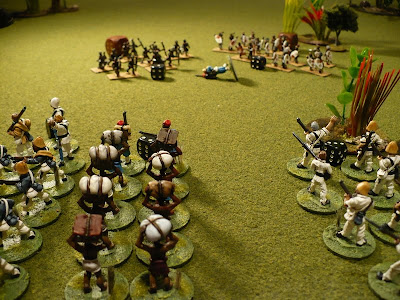 Seeing this, or perhaps still suffering from the after-effects of the fight, Cpl Chien was unable to properly motivate his men.  Terrified of the fury of l'indigènes, their nerve completely shot, the Tirailleurs retreated further, taking Chien with them, dazed and shaken. 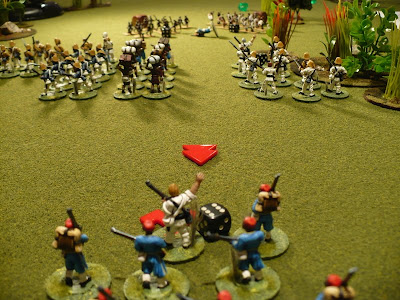