While Capitaine Woolfe's practiced mind was running through the necessary orders, the Pygmies came on again!  Too soon, he thought.  Before he could give those orders the White Shields to his front approached and fired their blowguns.  One of his Marines went down, a feathered dart in his throat.  Woolfe restrained his men from wasting a shot in reply; they would simply snap it off and miss, if he let them.

The same White Shields shot their blowguns again at the Frenchmen, causing two more casualties.  Were the darts poison-coated?  It was too soon to tell if any of his men would rise, or lie forever where they fell.  Woolfe felt a curious personal dislike for these tricky l'indigènes and their pagan beliefs.  This time he ordered his men to return fire, bringing down two of les monstre miniatures.  His own and Frye's shots, however, missed. 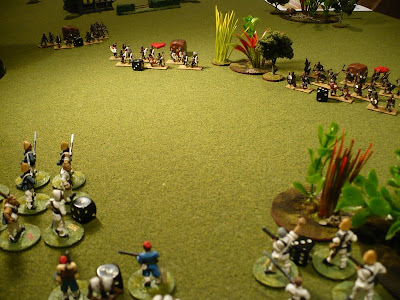 While he was preoccupied with the White Shields, Woolfe didn't notice the Black Shields to his right approaching until they were almost upon him.  They seemed to materialize right out of the jungle.  Feeling the pressure, Woolfe again ordered his men to fire, this time at the Black Shields, causing two to fall.  His own pistol shot accounted for a third.

Unfortunately, these Black Shields were a fierce enemy.  Their response to their comrades' deaths was to blow a hail of deadly darts at the Marines.  Yet another Frenchman sank into the tall jungle grass.  And to add insult to injury, they fired again!  Their aim was perfect, as two more Marines dropped.

Le capitaine could tell his Marines would be unresponsive now; they were feeling the pressure, too.  He could get nothing more out of those who remained, but he at least prevented them from being more scared than they already were.

With his hands full controlling his Marines, Woolfe could only hope his earlier orders were being carried out by his other patrols.

At the back of the French formation, caporal Chien advanced his Tirailleurs ahead in open formation, but he could urge them no further.  They remained far too shaken at the savagery they had witnessed from the Pygmies to voluntarily come any closer.

Sergent Coyote of legionnaire squad B, meanwhile, formed his men into a supported firing line adjacent to the remnant of Capitaine Woolfe's Marines.  Woolfe was glad to have the seasoned soldier with him; Coyote knew what needed to be done as well as anyone.  He could see, as well as Woolfe, that the Pygmies were working themselves up for an imminent charge. 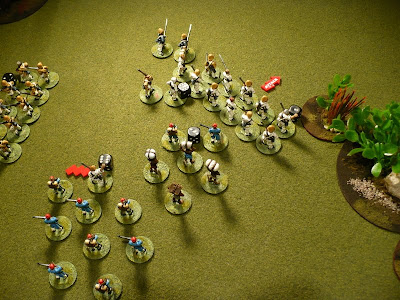 Trying to head off that close attack, Coyote ordered his men to shoot at the Black Shields just in front of them.  The calm, deliberative fire only caused one Native to fall, but the effect of the volley was greater:  these Black Shields, who had so brazenly snubbed their noses at Woolfe, now fled in dissarray.  They would not approach so carelessly again, Coyote gloated. 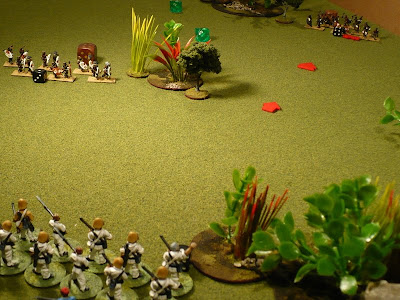 There were others who would, though.  The White Shields and the other Black Shields (to the left, who had already lost their own leader) with a clangor of stomps and shouts, charged forward to attack the remains of Woolfe's squad and B legionnaires.  Simultaneously, Coyote ordered bayonets fixed. 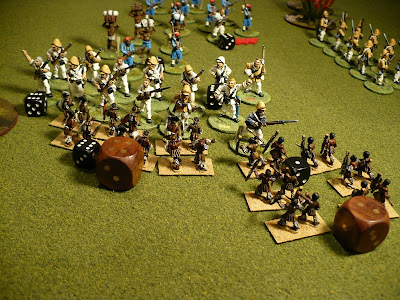 The White Shields surged into contact with Coyote's men, but with the sure confidence of veteran soldiers the legionnaires stood their ground.  They could only watch as the Black Shields attacked the Marines.  Few though they were, they were one less almost immediately. 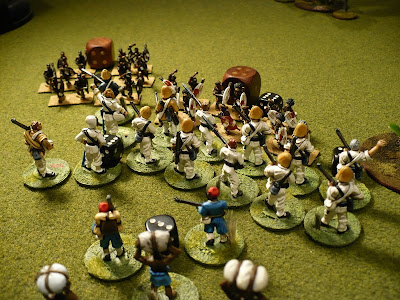 In the mêlée with the legionnaires, the advantage changed sides as quickly as the jungle weeds grew.  Just when it seemed Coyote's men were winning, the Native leader would mutter something in his gibberish language and his men would fight even harder, sometimes blocking the kill and stealing their own.  One legionnaire, then another, collapsed under the spears, even as a Pygmy fell too.  Finally Coyote felt he had the fight won, when the cunning indigène tried to stab him in the back.  He missed, and it was too little, too late, for the remaining Pygmies retreated, shaken and bloody. 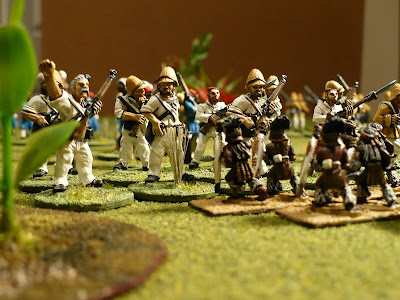 There were very few Marines left to fight off the White Shields.  The French caporal de l'Infanterie Marine, Cabot, threw himself in front of the onrushing horde, only to be unceremoniously trampled.  Lieutenant Frye, despite an instant's hesitation, boldly interposed himself between the Pygmies and his capitaine.  It was not enough to turn the tide, though, and Capitaine Woolfe, his sword red with blood, took a club to the head and collapsed.  Seeing his leader fall, Frye redoubled his efforts, personally seeing off three Natives.  His bravery won the day; with an overarching effort, and almost single-handedly, the Pgymies turned tail and ran. 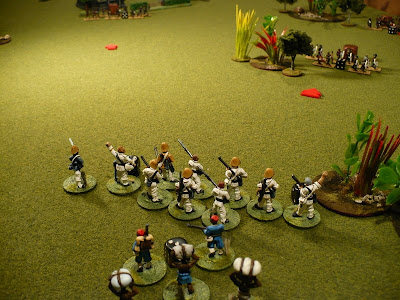 They found Doopee, one of the Native Bearers, crying over the body of his friend Loopee, never to bear a load again.

Lt Frye took deep shuddering breaths, and took stock of his situation.  Cpl Cabot was shaking his head as he stood up, as if to clear the cobwebs away, but he appeared otherwise unharmed.  Three Marines likewise were dusting themselves off, only slightly the worse for wear.  Three others, however, were victims of the Pygmies attack; about a fourth it was unclear if he would recover.

But the greatest tragedy was Capitaine Woolfe, dead on the trampled jungle floor.  Frye bit down hard to hold back tears.  Command devolved to him, and at that moment something in him changed.  He felt an anger he had never felt before, and a furious rushing sound filled his head.  He would avenge his fallen mentor, and prove himself worthy of his trust.  "Le capitaine est mort, vivent longtemps le capitaine!" he called, letting the men of le troupe, of his troupe, know what had happened.

Legionnaires Goort and Wood of B squad climbed back to their feet, having had their breath knocked out, nothing more.  They shared a glance, upon hearing the news that Frye was in command.  Things just got a lot more interesting, and a lot more dangerous, they decided.

From what Frye could see, the Natives had not fared well in the engagement.  Only two, perhaps, of the seven Pygmies returned to their units.

Frye turned to survey his command.  He met the eyes of Cpl Chien, shaking his fists in exasperation as his Tirailleurs retreated yet again.  They had seen Capt Woolfe die, and their already fragile nerves were strung tauter than the government's money purse.  He wanted to rail at them, and show them how the leaderless Black Shields had already returned to good order, as well as the Black Shields who did not take part in the mêlée.  Only the White Shields were having difficulty finding themselves again. 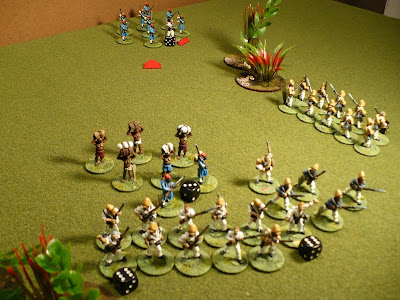 Frye set his jaw.  It would take all his command experience, and natural cunning, to complete this mission.  One thing he knew for certain:  he would rather die than return with his tail between his legs again.  The Native shrine must fall!