Lieutenant Frye, swiftly mastering himself in the face of a threatening enemy, rapped out orders as though Capitaine Woolfe was standing at his shoulder.  L'indigènes were still out there, mingling in massed formations, hooting and hollering in fury.  It would surely only be mere moments before they rallied enough to renew their attacks.  If he were to win this fight, he must take it to the foe.

"Sergent Coyote," Frye called to the veteran soldier of B legionnaire squad, "if you would be so kind, have your men shoot those petits bâtards."

"Aye, mon capitai--"  Coyote broke off abruptly.  "Oui, lieutenant," he finished lamely.  To his soldiers he gave the command.  Their shots roared out at the Black Shields off to their right.  Their aim was rewarded at seeing one of the Pygmies drop.  It was further rewarded when the Brown Shield leader was unable to stop their rearward flight.  They had run earlier at the firing of the legionnaires and they were running now.  They disappeared into the jungle as though they had never been.

Frye returned his attention to his front.  The other group of Black Shields had retreated far upfield.  There they sat, leaping obscenely in mock taunting of the French forces.  Frye gauged the distance:  it was far, well outside pistol shot, but worth a try.  He ordered what remained of his Marines to fire.  To his dismay they missed.  In response, though, he could see several of the Pygmies start to bring their blowguns to their lips before realizing they, too, were well out of range.  Their dismay was greater than Frye's as they fell back further.  It was apparent they sorely missed their Brown Shield leader.  Now they had retreated to surround their decrepit shrine, no doubt to bolster their courage and allay their confusion. 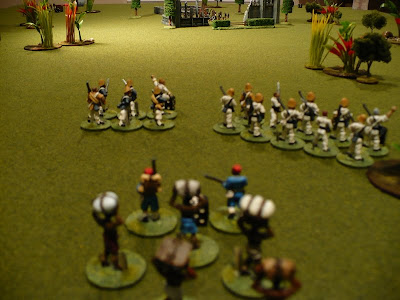 With no more immediate targets presenting themselves, Frye let out a breath he didn't realize he had been holding.  He ordered his Marines to form a supported firing line, then both his and Coyote's squads advanced a short distance.  He would continue taking the fight to the enemy.

The White Shields' leader was showing signs of regaining control of his men.  It was all he could do, it seemed, to urge them into cover behind some thick jungle plants. 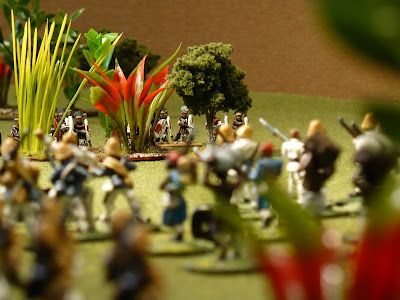 Frye wiped the sweat from his forehead.  It was disconcerting how easily these jungle warriors could practically disappear!  Sometimes all that gave them away was the glint of their eyes.

Frye gestured for Seejee and Sawjaw, the Tirailleurs leading the Native Bearers, to move their men up.  As he turned back around, he saw those leaderless Black Shields, reinvigorated after their dance around their shrine, come creeping out. 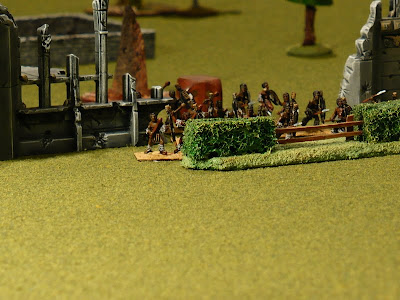 They were not yet brave enough to test the White Man's fire sticks again.

Unexpectedly the third and last Black Shield unit came rushing out of the underbrush on the left flank, firing their sinister silent blowguns at squad A of the legionnaires. 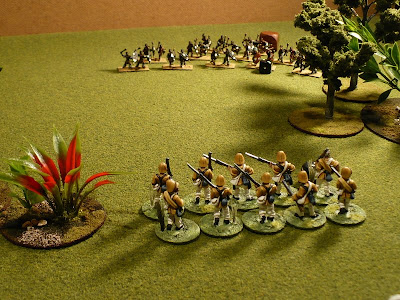 Trooper Hund fell heavily against the man next to him, a feathered dart protruding from his chest.

In response, Sergent Cur ordered rifles raised.   The volley shook the trees, causing brightly plumed birds to launch into the air, and felling two l'indigènes.  Following up on his success, Cur had them fire again, only to waste the ammunition.  The Natives did nothing in reply.

These Black Shields were fresh and eager for blood.  With a frenzied roar the Pygmies charged Sgt Cur's legionnaires.  Cur coolly surveyed his men, and was proud to see no fear in their faces; only disgust, and anger at the death of Capitaine Woolfe.  They stood firm to receive the charge, getting off one volley with little effect -- one Pygmy dropped -- before the cannibals were amongst them. 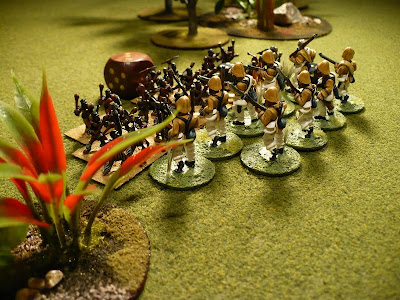 In the first rush of mêlée Cur felt he had it won at once; yet in the moment of near-victory the Pgymy Brown Shielded leader rapped out some pre-planned orders and Cur's confidence evaporated.  By good luck, the Brown Shield narrowly saved his own neck.  Cur's men were whittling the Pygmies' numbers down one and two at a time, when the Brown Shield tried another surprise tactic that almost spelled squad B's end.  Cur, though, his blood running hot in the middle of the action, snapped out his own orders and encouragment, and caught the Brown Shield leader on the head with the butt of his rifle.  Without his inspiring presence, the Black Shields quickly fell beneath the bayonets and boots of the legionnaires.

The sparse remnants of the Black Shields retreated in disorder. 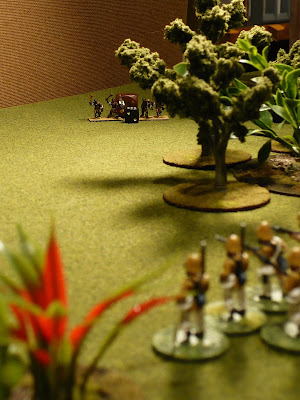 Cur caught his breath, then shouted a report to Lt Frye.  As Frye listened, the fourth downed Marine stood up, weak-kneed but hale.  Legionnaire Hund, however, remained semi-conscious.  His body trembled with fever as he tried to fight off the poison in his system.

As Cur stomped through the tall grass he counted six dead Pygmies, but -- curse it all -- the Brown Shield leader was not among them.  Squinting against the sweat and glare, Cur could just make out four Black Shields half-carrying their leader back to his unit.

To Fyre's immense relief, the Tirailleurs Sénégalais finally rallied their courage and regrouped.  Apparently only the undaunted bravery of the legionnaires was enough to finally restore the yellow-backed unit.  Frye swore lustily in three languages at their cowardice.

Returning his attention to his right flank, Frye could see that the cover of the jungle had similarly restored the spine of the White Shields there.

Yet overall, Lt Frye was pleased.  The enemy, while not on the run, had been dealt enough of a bloody nose to give him pause.  The French would have to make the most of this short breathing space.