Lieutenant Frye considered his position.  His troops were in good order, ready and awaiting his commands.  They would be able to carry out a great many orders quite easily, he sensed.


The White Shields to the right front came sneaking through the foliage, trying to get closer to B legionnaires.  To Sergent Coyote's credit, his men ignored the Pygmies with a nearly-palpable disdain. 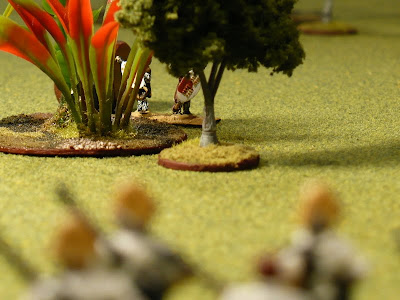 To make up for their dismal performance so far, Caporal Chien ordered his Tirailleurs forward, advancing towards the Black Shields who had caused so much trouble just before.  His anger at his men was tempered by the knowledge that they could just as easily run away again, so he was gladdened by Sergent Cur leading his A legionnaires in supported line at the same Natives. 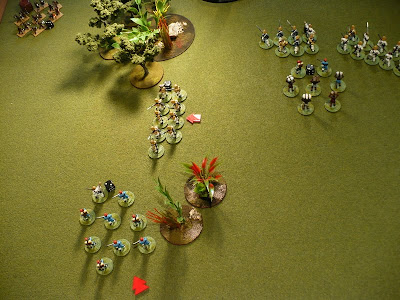 Before Lt Frye knew it, things began to happen very fast.  Cpl Chien's Tirailleurs fired at the Black Shields in front of them.  Still some distance off in the brush, they missed, but the plucky Pygmies' response surprised them all:  Chien saw them first attempt to shoot their blowguns before realizing they were out of range.  Then they began to work up their courage, shuffling closer with only some hesitation.


On Frye's right, Sgt Coyote's legionnaires fired a volley at the half-hidden White Shields.  The jungle was good for hiding, but not so good for blocking bullets, as two more l'indigènes dropped.  The White Shields, either by design or luck, did nothing in reply except hide harder at first.  After several moments consideration, though, the Brown Shielded leader convinced his men to reveal themselves long enough to shoot their deadly darts at B squad.  Their aim was just as good as ever, proving that not hiding held no advantages either:  the Swede trooper Karl fell, as did Sgt Coyote, fletched barbs bristling from their faces.  The legionnaires' relentless training paid off, as even leaderless they returned fire, killing(?) one more Pygmy.


L'indigènes jungle-wide seemed to pause, and into the hesitation stepped Lt Frye.  He ordered the Marines to fire at those same White Shields, who were entirely too close and entirely too sure of themselves for comfort.  In retribution for offing Sgt Coyote, the Marines' fire dropped two Natives, including the Brown Shield leader.  The Pygmies were obviously well-trained, too, as they still did not flee.


Fyre's joy was short-lived.  Even leaderless, the White Shields charged B legionnaire squad.  Behind him, Frye heard the piercing war whoops of the Black Shields as they charged into mêlée with the tirailleurs, who were at least supported by a counter-charge from A legionnaires.  Perhaps it was knowing these stalwarts were by their side that kept the tirailleurs steady enough to receive the charge. 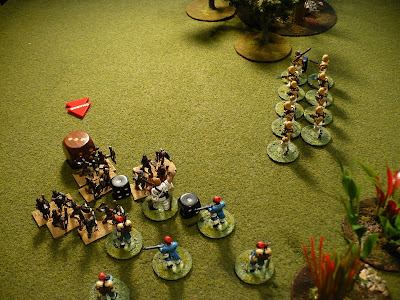 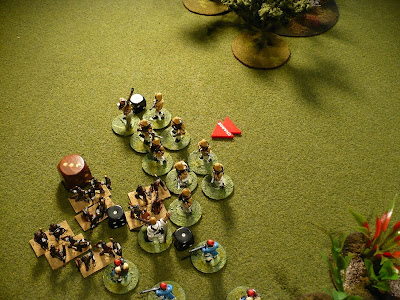 Even stalwarts can have enough, and B squad, leaderless without the steady discipline of Sgt Coyote, fell back a considerable distance, shaken. 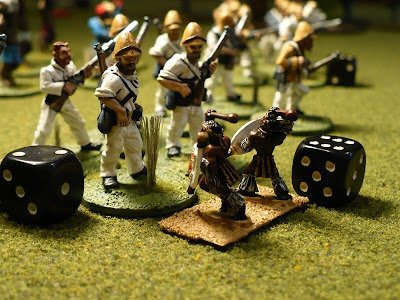 The fear in his eyes is very evident! 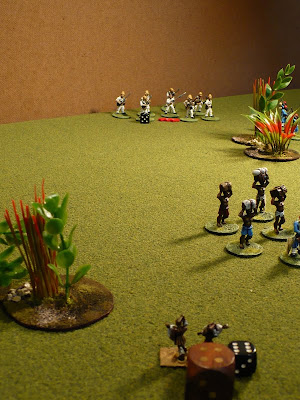 The Black Shields had whipped themselves into a veritable frenzy, and their reaction to a charge in their flank was to accept it and fight both fights at once! 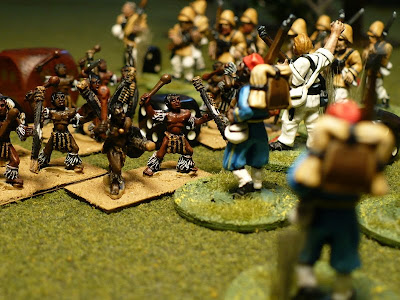 The French forces felt unusually confident going into this fight:  l'indigènes were outnumbered and they were flanked.  However, no one told the Brown Shield leader!  When the conflict began to go against the Pygmies he urged his men to greater efforts, and was nearly successful in turning the tide of battle.  Unfortunately for him, as he turned to urge his men to those greater efforts, he exposed himself to a vicious counter-thrust of a bayonet, and down he went like a small-statured sack of potatoes.  After that, the combined muscle of tirailleur and legionnaire saw the Pygmies off in short order.  The White Shields fled back the way they had come, severely shaken and leaderless. 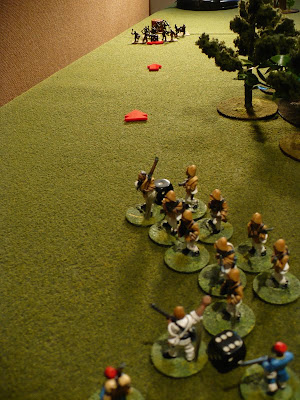 Sgt Cur, following up on his win, pivoted his men to face the direction the Natives had retreated. 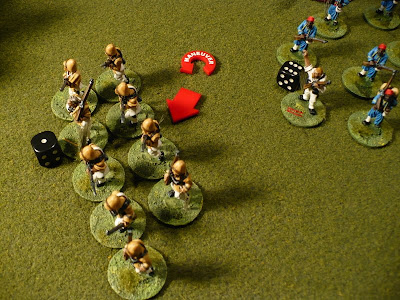 Lt Frye's head was a whirl of sounds and smells.  The acrid smoke of gunfire mixed with the wet smell of jungle mashed underfoot into paste.  One the one side he had a traumatically weakened flank where B squad had been; on the other, he had victory in force.


As he scanned the scene, reports were relayed to him.  Trooper Hund of A legionnaires was dead, unable to recover from the terrible poison of the blowdarts.  Sgt Coyote and trooper Karl were in a similar situation:  shaking with fever and ague; only time would tell if they would recover.  To Frye's immense relief, though, he saw the senior trooper of B squad, the Italian name Cane, stop his fellows' flight and remind them of themselves.  Frye knew he could count on them immediately.


Of the White Shields who had seen off the broken legionnaires, two bodies were confirmed dead.  The rest, including the brazen Brown Shield leader, stood up again, ready to renew the fight.


And all of the Black Shields, including that brazen Brown Shield leader, rejoined their unit.  But it was not enough to keep them from running further afield.  Their nerve was shot at last.