15. Death in the Jungle: Battle is Joined 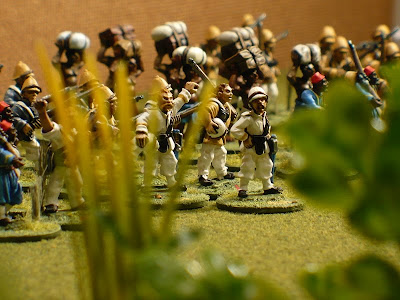 Capitaine Woolfe of la Légion Étrangère paused to wipe the sweat from his brow.  Le jungle was hot today, hotter than usual.  The wild sounds buzzed and hooted from all sides, hemming in his little force of soldiers.  Fortunately for him, the claustrophobia one sometimes felt in the deep jungle was lessened here in the approaches to their objective.  The constant comings and goings of the natives had worn away some of the densest undergrowth and left them with a relatively clear path to the shrine. 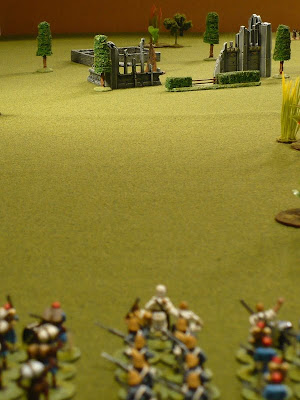 They were closing in on the pagan ruins and had encountered no opposition on the way.  Le Capitaine was anxious to carry out his mission of punishment by defiling the natives' source of religious fervor.  He himself was ni ici ni là, neither here nor there in regard to religious fervor, except when that fervor manifested itself in vicious, cannibalistic attacks on French citizens.

The first mission, sent out under command of the incompetent Lieutenant Frye, had barely penetrated the jungle before scurrying home with its tail between its legs.  Woolfe blamed himself for sending the favor-currying buffoon out in the first place.  Now the attacks were worsened as l'indigènes sensed weakness in the French resolve. 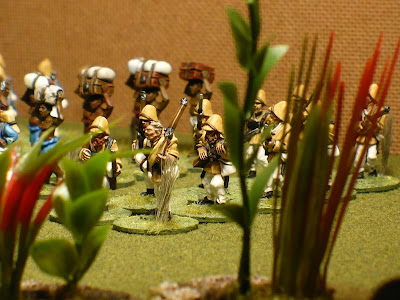 Quickly rounding up all the troops at his disposal, Woolfe had set out with two full squads of Légionnaires with experienced sergents; a squad of Infanterie de Marine led by a caporal; and a squad of Tirailleurs Sénégalais with their French caporal.  In addition, he had pressed into service a group of Native Bearers, herded along by a couple of Tirailleurs Sénégalais, to break up and cart away the religious totem that was the object of the expedition.  He himself was leading the operation, and he had brought the pathetic Lt Frye along as well, with the hope that a little experience might sink in before Frye got more men killed. 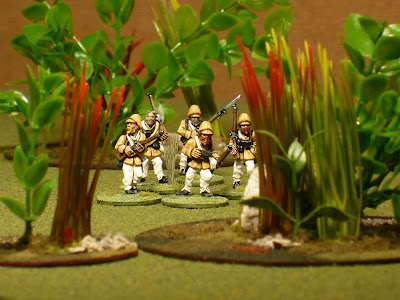 These indigènes, these Natives, had a most disconcerting way of appearing suddenly out of the thickest growth, attacking, and disappearing the same way.  Oui, they might be Pygmies, half a man's height, but they were diables dans un tourbillon, devils in a whirlwind, in a fight.  They fought with the silent blowgun, followed by a bloodcurdling yell and a charge into combat where their vicious stabbing spears could do the most damage.  They rarely hesitated to take on the direst of odds, and they seemed to harbor an especial hatred for their larger Black cousins.  The Native Bearers had practically to be goaded along at bayonet point; even the Tirailleurs were not unaffected with dread.

The troupes had been advancing through the jungle in column formation for the sake of haste, but as the ruins poked into view through the foliage Woolfe called a halt to better position his men.  A sudden quieting of the tropical noises alerted them to the imminent danger.  The French force had walked into an ambush! 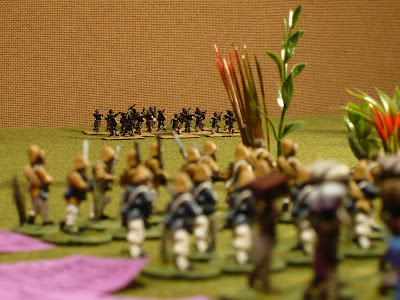 From ahead to their left, Chief Otanga himself led those of his warriors who carried muskets in the attack.  Smoke billowed out as they fired at the legionnaires under Sergent Cur.  Cur's men stood their ground, coolly surveying the results:  all shots missed.  Unfazed, the legionnaires formed a supported firing line.  Otanga screamed at his men to reload, and they fired again -- a legionnaire dropped -- and again -- miss!  Sgt Cur, awaiting further instructions from Capt Woolfe, kept his men in position and stilled their gut reaction to shoot back. 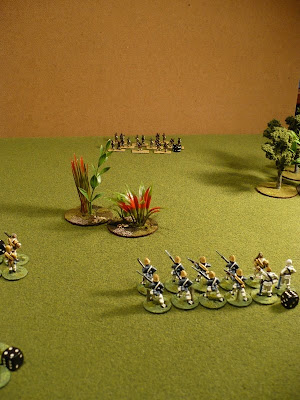 Woolfe realized his deployment was not conducive to surviving this battle.  Quickly he gave the order for he and his Marines to advance as far as possible, form a supported firing line facing Otanga's Pygmies, and fire.  Neither Woolfe nor Frye could shoot with their pistols as the range was too great, but the rifle-armed Marines caused one casualty in spite of the jungle in their way.  In response, Otanga shrilled at his men to reload and fire...and in other circumstances, perhaps he would have had his way, but his men's nerve failed when faced with massed rifle fire.  They backed away.  Otanga tried to rally them, but his screaming only spurred them on faster, and suddenly the jungle was quiet again as the Pygmies routed out of sight.

Lt Frye made some simpering comment about how easy it was going to be this time.  Woolfe glared daggers at him, and Frye's voice trailed away.  Privately, Woolfe shared the same thought, but as an experienced officer he would never say such a thing in front of his men.  Calling over his shoulder, le capitaine ordered the Native Bearers and the Tirailleurs to advance in column up to his current position.  Next he sent word for the legionnaires under Sergent Coyote to advance in column, then change into Open formation.  To Sgt Cur he ordered a change to Open formation, and then an advance. 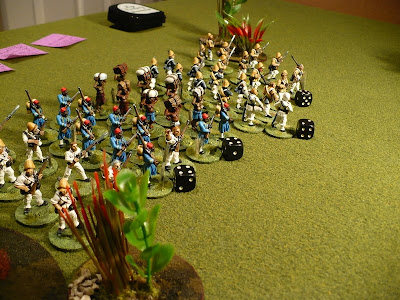 For the moment, all was still.  As the sounds of the tramping feet faded into silence, Cur grunted a warning.  Bayonets turned to the troop's rear, only to meet the astonished stare of legionnaire Hund.  In broken French he explained, "A ricochet....  I fell into the underbrush....  See?"  He poked a finger through the bullet hole in his sun helmet, his casque de soleil.  Glaring, he dared any man to call him coward.  Cur motioned him back into place in line.